The Two main categories of ingredients of Cannabis Sativa, that are beneficial to mammals – Cannabinoids and Terpenes - levels were tested using different Lab methodology required for testing each category of ingredient, by the National Analytical Forensic Services (NAFS) Lab in Centurion Pretoria, in July 2020. ​

Due to the growing popularity of CBD oil and possible growth of Entourage Oil as a wellness supplement – we decided to get the product, in it’s liquid form tested, using scientific methodology to get an accurate is idea of potential as well as to verify legality issues around maximum THC and CBD content allowed in a measured dosage of a wellness supplement like Entourage Oil.

Cannabis’ 2 types of ingredient categories – Cannabinoid and Terpenes – both occur in different degrees in different phoenomes (sub-strains of Cannabis) and are responsible for the wellness “effect” of consuming a product like Entourage oil. A combination of the combined ingredients work together synergistically to create what a person taking the oil experience as the “Entourage Effect”. 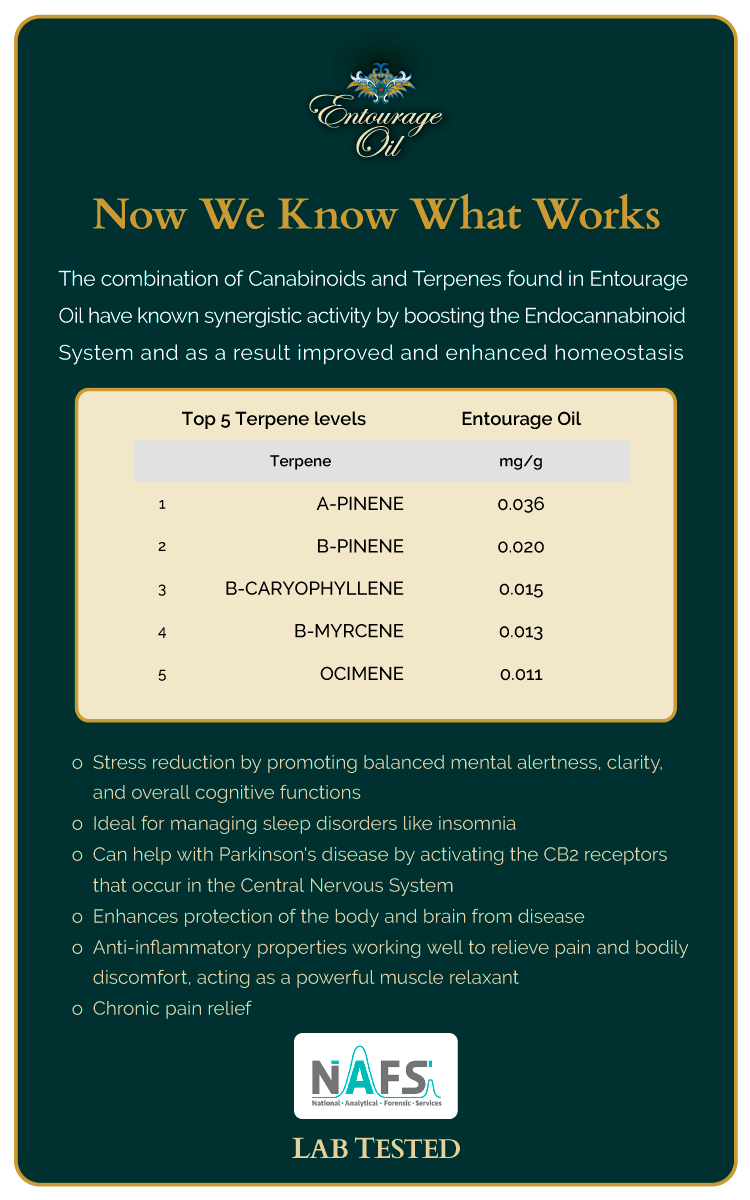 High-Pressure Liquid Chromatography (HPLC) is an analytical chemistry used to separate, identity and quantify each component in a mixture. The Cannabinoid profile HPLC test showed a dominance of THC, in either THC-A or Delta 9 THC. This dominance negates the other cannabinoids such that exist, but are at a much lesser degree so did not present at the level of the test done. ​

THCA and THC – what is the difference?
THCA is the most abundant compound in cannabis and is present before any heating or altering (aging as an example of “altering”)of this ingredient occurs. THCA is the precursor to the THC compound. THCA potential must be taken into account when calculating the potency of a cannabis strain, even though THCA itself is non-intoxicating. The reason THCA is not intoxicating is due to the three-dimensional shape of the THCA molecule. It is a larger molecule that doesn’t fit into our CB1 receptors. A cannabinoid must fit into a body’s CB1 receptors (mainly found in the brain in the Central Nervous System, and also in lungs, kidneys and liver; CB2 found mainly in the immune system and in hematopoietic (immature) cells in the blood and bone marrow) in order to have an intoxicating effect at all. Once cannabis is burned, vaporised or cooked it enters a process called decarboxylation, which transforms the non-intoxicating THC-A into psychoactive THC.

​Terpenes are aromatic hydrocarbons found in the essential oils of every plant and flower. They’re even found in some insects! They have a long history, first used by the Ancient Egyptians for religious reasons e.g. embalming of the dead. It wasn’t until recent years that terpenes blew up in the medical community, with respect to a specific plant: Cannabis.

A decade ago, growers and consumers judged cannabis strains only by their THC content. However something more was involved than just THC.  How come one strain benefited a person more than another strain when their THC content was the same? Now we know it’s because of the synergy between a myriad of ingredients known as the “entourage effect" working within our bodies Endocannabinoid system.

THC (and other cannabinoids) don’t actually operate in isolation – they work best in synergy with other cannabis compounds such as terpenes. Terpenes are well-known for giving each cannabis strain its unique smell and flavour profile. But they also have the power to enhance or even hinder the effects of the cannabinoids as well as have benefits of their own.

Terpenes are a group of 200 + molecules produced by the cannabis herb that have been proven to provide a wide range of efficacies, including analgesic and anti-inflammatory properties. Terpenes constitute approximately 10 - 20 percent of total pre-treated resin produced by the nearly microscopic trichome glands of the mature female plants.

It must be stressed that the theoretical efficacy of an individual terpene, such as myrcene, is confounded by the fact that it is typically consumed in tandem with other terpenes and cannabinoids and this interaction and its benefits are the subject of much current scientific exploration.

No warranty whatsoever is made on entourgaeoil.co.za. There is absolutely no assurance that any statement contained or cited in any way touching on medical matters is true, correct, precise, or up-to-date. Even if a statement made about medicine is accurate, it may not apply to you or your symptoms. The information provided on entourageoil.co.za is, at best, of a general wellness nature and cannot substitute for the advice of a medical professional (for instance, a qualified doctor/physician, nurse, pharmacist/chemist)
​
This Website, all its Pages & its Content are all published without prejudice by the writer,
​is not intended to provide medical advice, diagnosis or treatment and no claims Latent or Patent are made herein.